If you’ve ever lived in an apartment building, you’ve probably had contact with maintenance workers. They’re tasked with fixing everything from leaky faucets to broken lights and much, much more. And since tenants allow them into their homes to do work, maintenance workers often get a glimpse of what happens behind closed doors. Usually, there’s not much to see. But this time, the unthinkable was happening in a building in Georgia.

This is the story of the worst problem one Clayton County maintenance worker had ever seen — and it wasn’t even what the apartment owner had called him to fix.

The poor dog was nothing more than a bag of bones. The maintenance worker knew that a dog shouldn’t have to live like that and called the police. But they told him that he couldn’t rescue him because it would be considered theft.

So the man called animal control, who left notices on the dog owner’s door. The abuse went on, however, until the maintenance worker finally got his chance.

One morning, he saw the dog in a small cage on the street. His owner had abadoned him. It was a terrible way to get rid of a dog — especially one in such poor condition — but it also gave the maintenance worker an opportunity to help.

He immediately rescued the poor dog from the cage and drove him to the closest animal hospital — one and a half hours away.

“When he came up here he was crying, he was in tears, he was in disbelief,” Cinnamon Koch, who works at the animal hospital, tells NBC 11 Alive. “This is the worst case I’ve ever seen. He’s so sweet and loving. All he wants to do is kiss you.”

The veterinarian noted that in addition to being skeletal, the dog also had burns on his paws.

She says that as bad as the dog looks, he’ll probably survive, thanks to the maintenance worker who drove him to the hospital. Because she had no idea what the dog’s name was, she named him after his guardian angel — maintenance worker Mikey.

Soon after Mikey arrived, four young girls heard about him and have donated their weekly allowance to help him recover. They visit the animal hospital as often as they can to see him.

Mikey only weighed about 24 pounds (10 kg) when he was admitted — about half of what he should have.

Police report know who did this, but haven’t pressed charges yet, as they are currently still investigating the case, reports NBC. 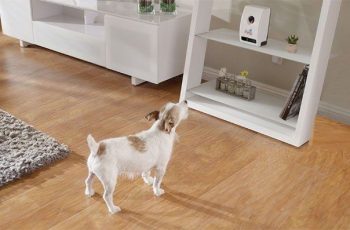 4 Cameras That Let You Check on Your Pet When …