Some rules are meant to be followed, and some are expected to be broken. The regulations, in this case, are clear when it comes to carrying animals on the NYC subway. “No person may bring any animal on or into any conveyance or facility unless enclosed in a container.” It looks like there’s no room for interpretation, right? But the New York subway rules say nothing about the size of the animal or the form of the dog carrier, and as you can see from this picture, some people are quick to exploit that fact to avoid a fine for not following the rules of public transport use. This guy and his husky were recently captured riding the subway by CBS news producer Alex Romano, and it’s hard not to smile when you look at it. Perhaps it’s the not-so-covert nature of the operation. Perhaps it’s the casual pose. Or perhaps it’s simply the fact that the guy is carrying a large dog in a tote bag. Whatever the reason, we love it.

Scroll down below to check the genius solution for large dog breed specimens to travel in the NYC subway; it may give you a hint if you are experiencing a similar situation with your pet dog and public transportation, too. 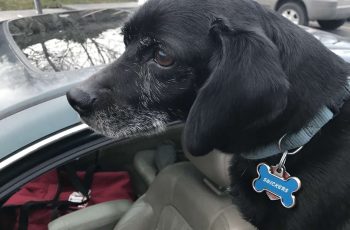 Pizza Guy Stops To Rescue Lost Dog During A Delivery …

The Dog Flu is Hitting Pets Hard This Year, and …